Main event of the medieval market. Set between the teams of knight and opposing men-at-arms. The end result is pre-fixed so that eventually the men-at-arms will lose. Knights will be “immortal” whilst the men-at-arms will fight according to their sense of honour or to the third hit before surrendering. After conquering the fort the knights will surrender themselves to the ladies inside the fortress.

Men-at-arms and other retainers (Venans)

Tournament combat is by nature such that the aim is not to kill or harm your opponent, but rather to otherwise defeat and capture the opponent.

All strikes should be performed so that they do not cause any harm to one’s adversary even by accident. Injuring other participants is strictly forbidden.

Defeated combatants may signal their surrender by kneeling and raising their hand. Striking a surrendered combatant is forbidden. Also the surrendered may no longer take part to the combat. After winning the battle the knights surrender themselves to the noble ladies inside the fort.

“Remember, there is no shame in surrendering, but it is a skill to know when to surrender!”

Additional information for each part of the show and their corresponding rules and equipment regulations are to be found from separate section from this web page so every participant may decide which part of the show they want to take part in.

Only with a familiar opponent if mutually agreed in advance 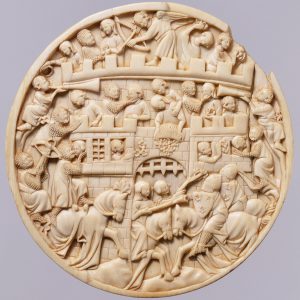